Posted by Charlie Smith in : News and Announcements
Source: The Georgia Straight

t will be celebrated at the opening ceremony and through various events and performances along Commercial Drive between noon and 8 p.m. One of the greatest examples of communità in the region's Italian community will be found at the booth of the Michael Cuccione Foundation for childhood cancer research.

Communità—community, in English—is the theme of Italian Day in Vancouver today 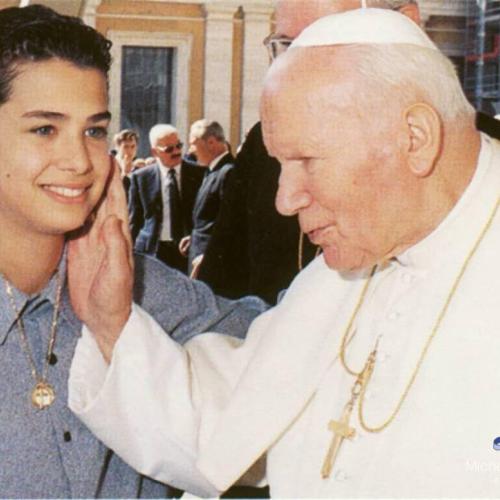 Michael Cuccione met Pope John Paul II during one of the former pontiff's visits to Canada.

Bartolo and Lucia Rinaldo (with their grandson Romano) set up elaborate displays of Christmas lights to raise $130,000 for the Michael Cuccione Foundation.

It's spearheaded by Domenic and Gloria Cuccione after being created by their son Michael in 1997.

The boy was battling cancer at the time. He died in 2001 from respiratory failure at the age of 16 years and nine days.

In his short life, Michael was a singer, songwriter, actor, dancer, and author, appearing in Baywatch and playing Jason "QT" McKnight in the 2ge+her movie and series.

At the launch of Italian Heritage Month at Vancouver City Hall last week, Gloria Cuccione told the Straight that her son was nine-and-a-half years old when he was diagnosed with Hodgkin's lymphoma.

"He shared a room with a baby who was actually born with cancer," Gloria said. "Michael couldn't believe that babies had to start their life that way."

So Michael decided to do something about it.

During his six months of chemotherapy, he started writing songs with the goal of helping others.

Tragically, the cancer returned and he received a bone-marrow transplant.

"Through two bouts of cancer, our son ended up putting a CD out called Make a Difference and he wrote all of his own songs—and raised $130,000 with the sale of his CDs," Gloria said.

B.C. Children's Hospital staff asked Michael what he would like to do with the funds. He replied that he wanted to fund young researchers studying childhood cancers to ensure that kids in the future wouldn't have to endure this disease.

Five years later, after more fundraising, he obtained a matching grant, ensuring that $2.5 million was available to provide lifetime funding for two scientists to do this work.

After Michael died, the family had to figure out what to do next.

According to his mom, his younger brother Steven urged the family to continue Michael's legacy through the foundation because that's what he would have wanted. It's now raised $24 million for the cause.

Italian Canadians have played a key role in these efforts through a variety of community efforts.

To cite one example, Burnaby residents Bortolo and Lucia Rinaldo put up a 50,000-light display at their home every Christmas for more than 20 years for the Michael Cuccione Foundation.

Their son Randy told the Straight that this alone raised over $130,000.

With the support of communità, there is now full-time team of foundation-funded researchers making strides against childhood cancer.

At Vancouver City Hall, Gloria revealed that there's been another another $3-million commitment to fund immunotherapy.

The CAR-T cell therapy and personalized treatments are a cornerstone of foundation-funded research efforts.

This reflects Michael's curiosity about whether the cure for cancer might actually reside within the child.

This new funding will ensure that more kids won't have to travel to the United States for this treatment, which doesn't involve undergoing radiation or chemotherapy.

"They'll build their own T-cells against cancer...and it will kill the existing cancer and help give them another chance at life," Gloria noted. "That's for leukemia and lymphoma at this point."

She hopes that in the future, it will be available for other childhood cancers.

When the Straight asked Domenic if there was anything he would like to add, he smiled before saying, "My wife pretty much covered everything."

Then he became wistful and grateful as he talked about his son Michael.

Domenic used to tell his kids when they were young that he and their aunts and uncles were born in a house in Italy, which still stands in Vibo Valentia in Calabria.

Michael was surprised to hear about this, so Domenic promised to take him there one day.

But in fact, it was Michael who took Domenic to Vibo Valentia, not the other way around, after the boy won an award from the Italian government in 1998. Domenic hadn't been there in more than 40 years.

"He took me back home for the first time."

That wasn't Michael's only gift to his dad. The boy also enabled Domenic to meet the head of the Catholic Church.

"Around that same time, the archbishop in Toronto called and asked if Michael would like to meet Pope John Paul II," Domenic said. "I got lucky to go with him because someone had to chaperone him."

At the launch of Italian Heritage Month at Vancouver City Hall, Domenic and Gloria Cuccione spoke about their son Michael's philanthropy.