Yale researchers have discovered a "jamming signal" that blocks a powerful immune system stimulant called interleukin-18 (IL-18) from reaching tumors, including in cancers that are resistant to conventional immunotherapy treatments, they report June 24 in the journal Nature.

The research team created a version of IL-18 that could not be jammed and significantly reduced tumors in mice that are resistant to current immunotherapy.

Interleukin-18 is part of a vast immune system arsenal called cytokines and has the specific role of mobilizing T cells and "natural killer" cells to combat infections. Because of this activity, pharmaceutical companies had previously tried to use IL-18 as a cancer treatment. However, the approach failed to show any benefit in clinical trials.

"This was a major paradox to us because IL-18 sends an incredibly powerful inflammatory message to the 'right' immune cells that attack tumors," said Yale's Aaron Ring, assistant professor of immunobiology and pharmacology and senior author of the research. "The fact that there was no response to natural IL-18 in previous clinical trials made us think that tumors were employing immunological countermeasures"

The Yale team set out to find out how tumors shut down IL-18. They discovered that within many forms of cancer, there are high levels of a protein called interleukin-18 binding protein (IL-18BP), which acts as "decoy receptor," blocking the ability of IL-18 to bind to its receptor on immune system cells and activate an immune response.

"We figured that IL-18 was the right pathway to engage, but that IL-18BP was acting as a barrier to its activity," Ring said. "So we wondered if we could make a synthetic version of IL-18 that could overcome this problem."

Using a process called directed evolution, Ring's team searched through approximately 300 million different mutant forms of IL-18 to find rare variants that only bound the true IL-18 receptor and not the decoy.

Working with the laboratory of co-author Marcus Bosenberg, interim director of the Yale Center for Immuno-oncology and professor of dermatology, pathology, and immunobiology, the team administered the modified IL-18 to mice with a variety of tumor types, including those resistant to conventional immunotherapy. They found that the synthetic IL-18 greatly reduced the growth of the tumors and was able to completely eradicate cancer in many of the mice. When they looked within the tumors, the team discovered that the IL-18 drug worked to increase the numbers of an important population of "stem-like" T cells that sustain effective anti-tumor responses.

Existing cancer immunotherapies have proved highly successful in attacking so-called "hot tumors" or those characterized by the presence of inflammation. However, "cold" tumors or those lacking immune system activity, have been resistant to forms of immunotherapy currently in use.

"Because IL-18 can act on cells of the 'innate' immune system such as natural killer cells, it has potential to be effective against 'cold tumors' that have become resistant to conventional immunotherapies," said Bosenberg. "This is a major unmet need and one that the IL-18 pathway is poised to address."

Ring has formed a company called Simcha Therapeutics and hopes to begin clinical trials of the drug in cancer patients next year. 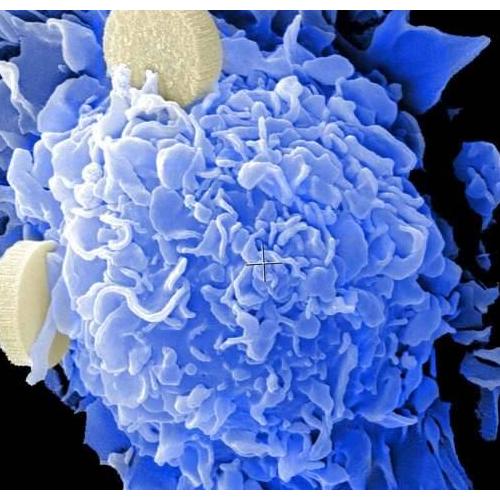