A new drive to develop a cutting-cancer treatment means the extraordinary vision of Michael Cuccione will live on – along with potentially countless children. The Michael Cuccione Foundation, which sparked a movement and helped raise $25 million over 25 years for childhood cancer research, is embarking on a new campaign. The effort aims to raise $10.5 million and bring together "the brightest minds in cancer research" to advance a groundbreaking immunotherapy – CAR T-cell therapy – for use on solid tumours.

Michael Cuccione was just nine years old when he got a diagnosis that no family ever wants to receive: Hodgkin's Disease. He underwent six months of chemotherapy. During his time in the hospital, hemet other kids with cancer, even sharing a room with a baby who had been born with the disease.

"Michael couldn't believe babies were born with cancer. He wanted to do something," recalls Gloria Cuccione, Michael's mother and executive director for the foundation.

In his fourth month of treatment, Michael contracted viral meningitis and had to go into isolation. He asked his father, Domenic, to bring him his keyboard, and he started writing songs. Hewanted to put a CD out and raise money for cancer research. Michael's cancer went into remission, then later returned. Through these battles, he recorded and released a CD of his music called Make a Difference, raising $130,000 by age 11.

"We went to BC Children's Hospital, and they said, "What do you want to do with the money, Mike?' And he said, "I want to fund young researchers for childhood cancer, or we're not going tohave them in the future.' And they just about fell off their chairs," says Gloria.

As his performances and appearances multiplied, he quickly became a local celebrity, raising awareness for childhood cancers. He was wise beyond his years, comfortably speaking to huge crowds all over the world with little preparation.

"I'd say, "Honey, you don't want to write a few words down?' And he'd say, "No mom, it's all right here. All in my heart.' And he'd blow your mind with what he'd say," says Gloria. "He got a standing ovation fromover 7,000 people who couldn't believe this young boy, who had such an empathy for children with this disease."

In the six years before he passed away, Michael raised $2.5 million toward two lifetime endowments for young scientists to pursue their passion for cancer research.

In the aftermath, the family realized a permanent research program was needed to keep advancing childhood cancer treatments. They committed to raising $10 million over 10 years but raised it in five, establishing the Michael Cuccione Childhood Cancer Research Program (MCCCRP) at the Research Institute at BC Children's Hospital.

Since then, the programhas beena centre of excellence for researching and testing new treatments. This includes CAR T-cell therapy, which the foundation brought to B.C. patients in 2018 by helping fund the hospital's participation in Cure works, a collaboration between leading academic children's hospitals around the world, focused on improving care for children with hard-to-treat cancers.

Today there are children in B.C. thriving thanks to this life-saving treatment, without which they would have been sent home with no hope. This clinical trial is now available at BC Children's Hospital at no cost to the families.

The next step is developing CAR T-cell therapy for solid tumours, which affect around 60 per cent of cancer patients at BC Children's Hospital. Currently, the technology can't penetrate solid-tumour cells. But with additional funding and work, researchers believe they can make this leap.

Once funding is in place, the first focus will be on sarcomas – tumours in connective tissue and bone – and expand from there. Currently, fewer than one in six children with sarcomas survive, so funding for this project will quite literally save lives. It might save a life like Michael's.

In addition to advances in immune therapy, the MCCCRP has been at the forefront of many important initiatives including more effective, safer therapies that reduce the lifelong side effects from cancer treatments, targeted medication for high risk acute lymphoblastic leukemia patients, and better diagnosis and treatment evaluation.

"We sincerely thank our Board of Directors, sponsors, family and friends for their generosity and supporting our goals for the past 25 years," says Gloria. "Together, we can make a difference and fulfil Michael's dream of oneday seeing a world without childhood cancer."

The Michael Cuccione Foundation is celebrating 25 years of making a difference. To donate and to learn more, visit childhoodcancerresearch.org. 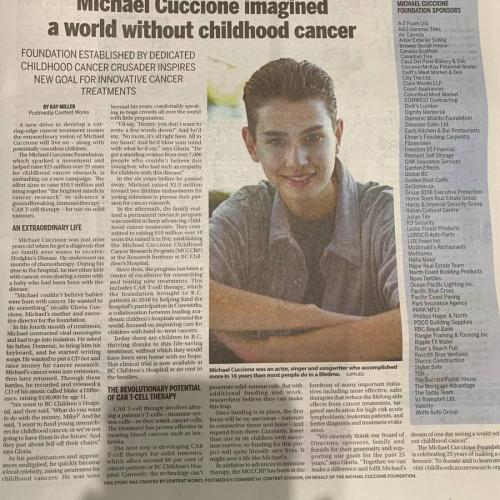 The effort aims to raise $10.5 million and bring together "the brightest minds in cancer research" to advance a groundbreaking immunotherapy – CAR T-cell therapy – for use on solid tumours.