Therapy-induced presentation of cell surface calreticulin (CRT) is a pro-phagocytic immunogen beneficial for invoking anti-tumor immunity. Here, we characterized the roles of ERp57 and α-integrins as CRT-interacting proteins that coordinately regulate CRT translocation from the ER to the surface during immunogenic cell death. Using T-lymphoblasts as a genetic cell model, we found that drug-induced surface CRT is dependent on ERp57, while drug-induced surface ERp57 is independent of CRT. Differential subcellular immunostaining assays revealed that ERp57−/− cells have minimal cytosolic CRT, indicating that ERp57 is indispensable for extra-ER accumulation of CRT. Stimulation of integrin activity, with either cell adhesion or molecular agonists, resulted in decreased drug-induced surface CRT and ERp57 levels. Similarly, surface CRT and ERp57 was reduced in cells expressing GFFKR, a conserved α-integrin cytosolic motif that binds CRT. Drug-induced surface ERp57 levels were consistently higher in CRT−/− cells, suggesting integrin inhibition of surface ERp57 is an indirect consequence of α-integrin binding to CRT within the CRT-ERp57 complex. Furthermore, β1−/− cells with reduced expression of multiple α-integrins, exhibit enhanced levels of drug-induced surface CRT and ERp57. Our findings highlight the coordinate involvement of plasma membrane integrins as inhibitors, and ERp57 originating from the ER as promoters, of CRT translocation from the ER to the cell surface.

Immunogenic cell death (ICD) is a form of therapy-induced tumor cell death which culminates in the release of damage associated molecular patterns (DAMPs) able to invoke an effective antitumor immune response (1, 2). Certain ICD-inducers able to provoke endoplasmic reticulum (ER) stress result in cell surface presentation of several ER-resident chaperone proteins as DAMPs, including calreticulin (CRT, encoded by CALR) and ERp57 (encoded by PDIA3) (3, 4). Even though surface ERp57 is non-immunogenic, it is non-dispensable for presentation of surface CRT as the immunogenic counterpart (4, 5). Thus, a mechanistic understanding of the regulators of surface CRT can improve the efficacy of therapies that optimize the ICD response.

CRT is a Ca2+ binding and buffering lectin that is highly abundant in the ER-lumen (6, 7). ERp57 is a protein disulfide isomerase (PDI) which mediates thiol-disulfide interchanges during post-translational folding of glycoproteins (8, 9). Structurally, both share common features that determine their primary ER-localization, such as an N-terminal signal peptide directing translational synthesis into the ER-lumen, and a C-terminal K/QDEL ER-retention motif. Increasingly, studies have identified extra-ER localization of either protein that has implicated additional non-chaperone related functions (10, 11). Within this context, the extra-ER roles of CRT have been more intensely studied, in part due to its deemed significance as an immunogen for professional phagocytes. However, ERp57 and CRT directly interact to form a stable complex (12, 13), thus it is likely that ERp57 would be present in the same extra-ER locales as CRT.

The integrin family of transmembrane cell adhesion receptors are heterodimers composed of an α- and a β- subunit (14). Integrin activation describes a functional switch from a low- to a high-affinity ligand binding state, with accompanying conformational changes to the extracellular, transmembrane and cytoplasmic domains of the αβ-subunits (15). We, and others, have shown that cell adhesion enhances α-integrin interaction with CRT, in a manner dependent on the cytosolic GFFKR peptide motif (16–18). The human genome encodes up to 21 α-integrin isoforms with sequence-unique cytoplasmic domains except for the conserved juxtamembrane GFFKR motif that forms the inner membrane clasp with its β-subunit counterpart (14, 19). Since protein interactions involving integrin cytoplasmic tails form the basis for integrin adhesion-mediated signaling, the GFFKR-mediated integrin-CRT interaction may constitute a conserved signaling mechanism attributable to the α-subunit for any given αβ-heterodimer.

Previously, we showed that leukemic blasts treated with ICD-inducers while engaging integrin substrates exhibited reduced presentation of cell surface CRT, suggesting that integrin function can suppress ICD (20). We characterized the successful release of CRT from the ER to the cytosol, but which failed to present on the surface of cells with activated integrins. This phenomenon can be explained as CRT being sequestered within the cytosolic space as a result of binding with the juxtamembrane GFFKR motif of α-integrins. In the present study, we assessed both the roles and surface presentation characteristics of ERp57 and CRT in coordination with integrin function. Our findings indicate that ERp57, CRT, and α-integrins, via their mutual pairwise interactions, coordinate to regulate surface CRT presentation in ICD. 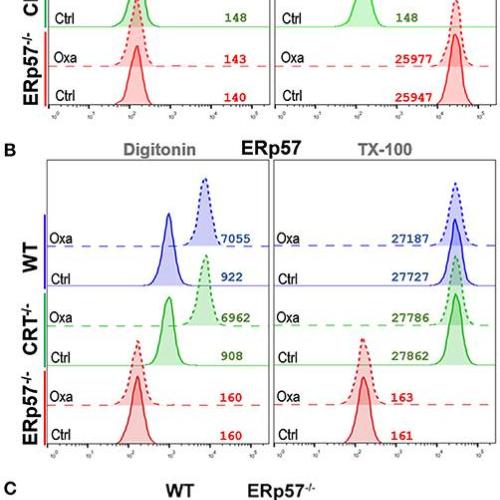