CD47 is a cell-surface marker well recognized for its anti-phagocytic functions. As such, an emerging avenue for targeted cancer therapies involves neutralizing the anti-phagocytic function using monoclonal antibodies (mAbs) to enhance tumour cell immunogenicity. A lesser known consequence of CD47 receptor ligation is the direct induction of tumour cell death. While several mAbs and their derivatives with this property have been studied, the best characterized is the commercially available mAb B6H12, which requires immobilization for induction of cell death. Here, we describe a commercially available mAb, CC2C6, which induces T-cell acute lymphoblastic leukemia (ALL) cell death in soluble form. Soluble CC2C6 induces CD47-dependent cell death in a manner consistent with immobilized B6H12, which is characterized by mitochondrial deficiencies but is independent of caspase activation. Titration studies indicated that CC2C6 shares a common CD47-epitope with B6H12. Importantly, CC2C6 retains the anti-phagocytic neutralizing function, thus possessing dual anti-tumour properties. Although CD47-ligation induced cell death occurs in a caspase-independent manner, CC2C6 was found to stimulate increases in Mcl-1 and NOXA levels, two Bcl-2 family proteins that govern the intrinsic apoptosis pathway. Further analysis revealed that the ratio of Mcl-1:NOXA were minimally altered for cells treated with CC2C6, in comparison to cells treated with agents that induced caspase-dependent apoptosis which alter this ratio in favour of NOXA. Finally, we found that CC2C6 can synergize with low dose chemotherapeutic agents that induce classical apoptosis, giving rise to the possibility of an effective combination treatment with reduced long-term sequelae associated with high-dose chemotherapies in childhood ALL.

Acute lymphoblastic leukemia (ALL) is the most commonly occurring childhood cancer, accounting for 25% of patients under 15 years old. ALL is highly treatable, achieving a 5-year disease-free rate approaching 90%1. Disease treatment is stratified into low and high-risk therapies, with vincristine, corticosteroids, and asparaginase included in both, while anthracyclines are reserved for high-risk patients given their elevated toxicity1. The long-term effects of high-dose chemotherapeutics carry an extensive burden of morbidity that may be fatal2. For example, doxorubicin is associated with increased risk of cardiomyopathy and secondary neoplasms, while neurotoxicity is associated with vincristine2,3. Due to the high treatment success rates for childhood ALL, the agents used in conventional chemotherapy have remained largely unchanged for three decades4. However, there remains a need for novel therapeutics, especially ones with reduced systemic toxicities, for improved long-term treatment outcomes and for those experiencing relapse with acquired chemoresistance.

CD47 is a 5-time spanning membrane receptor involved in various functions, including cell adhesion, T-cell activation, inhibition of NO-signaling, and, via its counter-receptor, SIRPα, inhibition of phagocytosis5,6,7. Increased CD47-expression has been observed in a variety of tumour cells and considered an adverse prognostic factor8. It is also the target of therapeutic intervention, achieved by antigen receptor neutralization using antibodies9,10,11,12,13. One aspect of CD47-mediated signaling that remains poorly exploited is its role in promoting cell death. Cell death can be triggered by CD47-ligation with certain antibodies, however, the most studied monoclonal antibody used to date, mAb B6H12, achieves this activity in immobilized form, a fact limiting its usefulness14,15. Several CD47-antibodies that induce cell death in the soluble state have been described (clones 1F7, Ad22 and MABL)14,16,17, however these commercially unavailable reagents have limited their exploration in understanding CD47-induced cell death pathways.

Apoptosis is a cell physiological program that enables the controlled removal of cells without triggering an immune response. Specifically, the intrinsic apoptosis pathway is enabled by mitochondria disruption resulting from dysregulation of the delicate balance of Bcl-2 family proteins, namely, the pro-survival Mcl-1, and its regulator, the pro-apoptotic NOXA18. Although caspase activation is a hallmark of apoptosis, evidence for caspase-independent cell death exists, including heat shock-induced cell death19, activities mediated by granzymes20, and CD47-receptor ligation21,22. Interestingly, despite being caspase-independent, many of these pathways still have phenotypes associated with classical apoptosis. For example, CD47-mediated cell death is associated with increased reactive oxygen species (ROS), disruption of mitochondrial membrane potential, and decreased ATP.

Given that most chemotherapeutic agents induce apoptosis via the intrinsic, caspase-dependent pathway23, we hypothesized that CD47-mediated cell death could complement the effects of chemotherapy since it employs a caspase-independent pathway. Here, we describe the cell death-inducing properties of CC2C6, a commercially available CD47-mAb, in T-lymphoblasts, and characterized its activity with regards to regulation of Mcl-1 and NOXA protein levels. In addition, CC2C6 potentiated the effects of commonly used chemotherapeutics at sub-optimal concentrations, including a synergistic effect when used in combination with the novel therapeutic, honokiol. Our results lend support for continued evaluation of the potentially multi-therapeutic benefits of targeting CD47 as a form of tumour immuno-therapy. 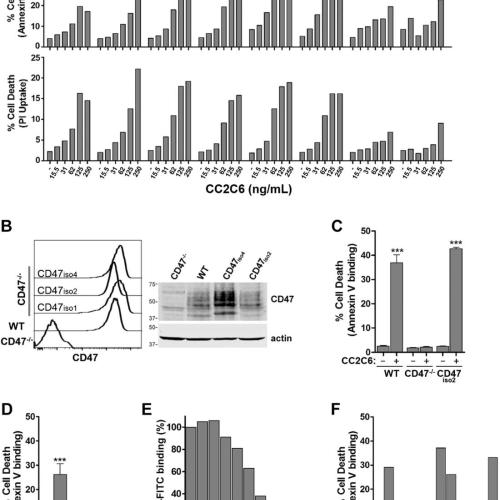